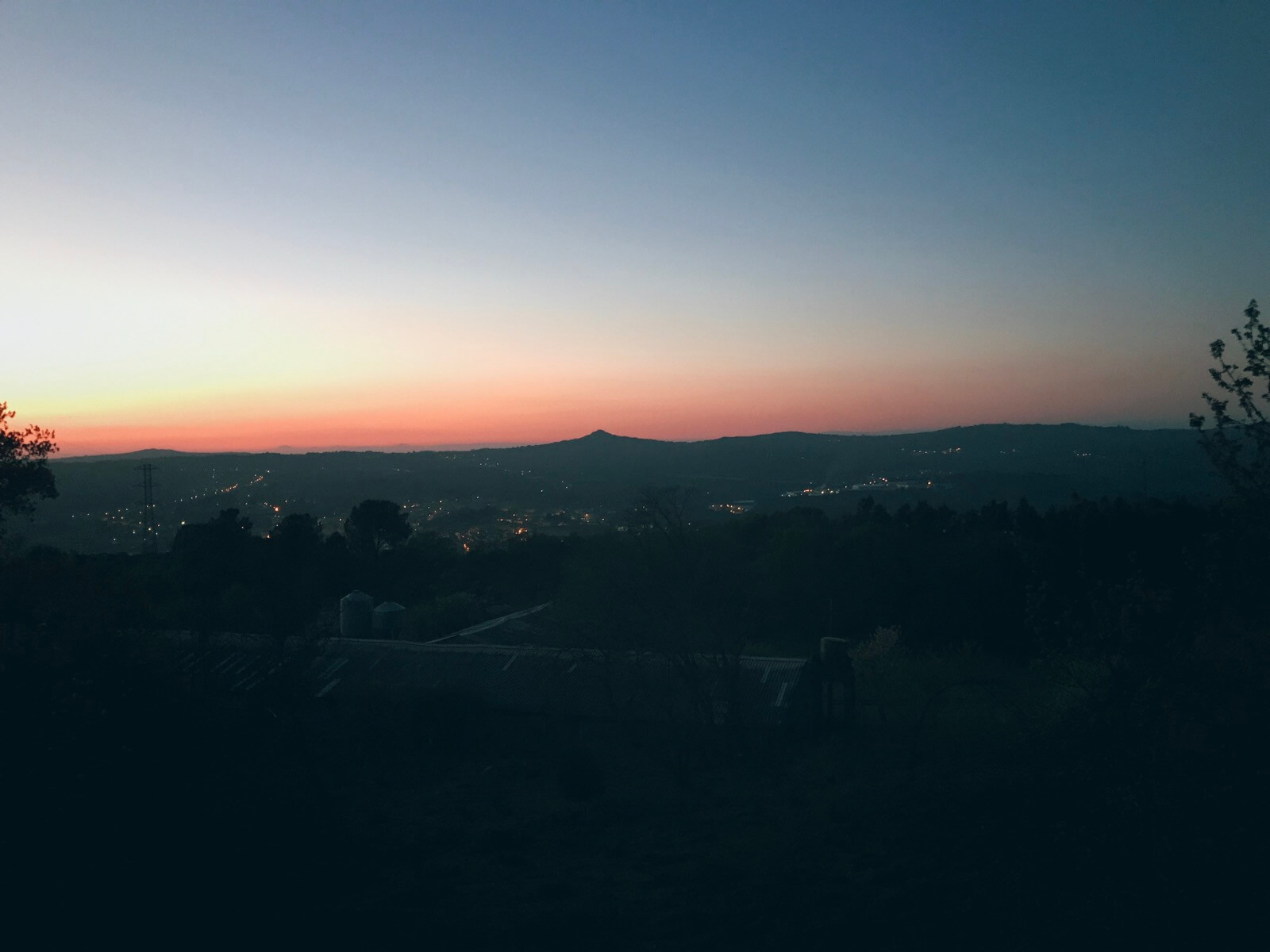 As the world settles in to its new virus-covered reality, time becomes amorphous. For many, especially city-dwellers, gone are the inessential errands, any whimsical excuse to leave the apartment, or the chance to meet up with friends on a nice day. “Is it Friday today?” Going to bed feels like a relief or a chore, the anchors of our social lives are lifted.

At least I have the woods behind our small village. I head up the road and enter one of the trails with my dog at least twice a day. Many of them are already well-trodden, even before the quarantine and a clearcut patch to give room for the electrical lines serves as a compass when we pretend to be new world explorers.

I often carry my phone to take photos. I was looking down at it this morning, cool but dry, when I saw a big black spot in the middle of the path. My eyes shot up and I saw the backside of a fleeing boar. My clueless unleashed dog didn’t notice and I grabbed him to prevent a futile and possibly dangerous chase. We continued cautiously for a bit looking for any sign that it ran off the path, but none. It was time to head back home, do some exercise downstairs and make some breakfast before my classes.

Bernie Sanders suspended his campaign a few days ago. Diagnosing the post-campaign mood of his supporters and the socialist left, the brilliant Meagan Day from Jacobin wrote;

Once you’ve actually internalized that society doesn’t have to be this way, that none of the exploitation you’ve experienced or witnessed is actually inevitable, that human freedom is achievable, you don’t go back to thinking otherwise. Once you’ve been looked square in the eye and asked which side you’re on, you never take for granted your own neutrality again.

Encapsulated in this paragraph is my political and personal trajectory. I’ve lived in countries with vastly different socioeconomic and developmental levels, worked jobs from washing dishes to teaching primary school, accumulated student and medical debt, and tried to make sense of the world physically and intellectually as best I could. And as most socialists would attest, I cannot unsee the inane hardship and structural barriers with the assertion that that misery for others can change, that we can build something better, something more just. Capitalism is not manifest destiny. I could not simply put my head down, try to live for myself, care only for my family and friends and isolate myself in a village in my corner of Spain without feeling any solidarity whatsoever for everyone, everywhere they may be.

Bernie Sanders was the moonshot candidate; the millennial left’s Lorax to speak on our behalf, since we hold no power of our own, despite some of our comrades pushing 40 years of age. In most industrialized societies, the reforms we were demanding would be common sense. But common sense does not square with American financial capitalism: the CEOs are too powerful, the parties too tied to form and not function, the president a sociopathic liar, his “democratic” challenger hardly a democrat and continuously on the wrong side of history, and the working class even more expendable than previously imagined.

In the end, I felt a lightness. I was buoyed by the momentum, assumed too earnestly that the ruling class would allow themselves to be overrun by Bernie’s nascent coalition of social movements, young people, communities of color, marginalized folks, and working people. That they would not fight back and punch us back down was us being foolish. And they landed their knockout by manufacturing the unlikely comeback of a compromised Joe Biden. If you feel this assessment is incorrect, that “democracy spoke” in the form of the primary, I would love to hear it.

We are living in the late Anthropocene. We have 17 million Americans out of work in just the last three weeks, with no real plan to help them in this crisis. The president gaslights the world every day with lies, his administration either gives PPE to private companies to auction off, pitting states against each other in a bizarre bidding war, or it steals ventilators from poorer Caribbean nations.

I have trouble believing we have the time necessary to build power electorally when a second and perhaps third wave of COVID-19 is expected. In the next decade, if drastic climate action isn’t taken, we will see those climate tipping points the IPCC report from last year warned us about. Even in the unlikely event of a Joe Biden victory, he will do very little on climate. His campaign has prioritized a return to some mythical normalcy, ignoring the fact that the Obama administration built the cages in deportation centers, bombed Muslim countries, supported death squads in Honduras, expanded the empire, etc. He has made it clear he has ‘no empathy’ for millennials.

In the daily outrages and political battles mixed in with the ups-and-downs of our own personal lives, the machinery of capitalism continues to extract and consolidate capital for the very few.

There are bright spots, however. People are waking up to their individual and collective power. We have seen the unintended reductions in carbon emissions when half the world must stay at home. No longer can the pundit and media class ask us incredulously, “How will you pay for it?” when we demand moderate social democratic reforms. We see the inhumanity of Jeff Bezos firing a striking worker who dared to ask that their Amazon warehouse be disinfected when workers tested positive. We will see a massive bump in member in organizations like Democratic Socialists of America. The political, economic, and social impossible is nothing but an illusion.

The old world is dying, and the new world struggles to be born: now is the time of monsters. — Antonio Gramsci

With newfound power, our enemies will become more brazen. As the US struggles to get a handle on COVID-19 and the president throws daily tantrums to reporters, we continue to witness a decaying empire gasping for last breath. They will try to distract us with a return to normalcy, a new iPhone or an endorsement from the “cool” former president. Perhaps they will enact fascism-lite policies such as monitoring cellphone tracking in exchange for freedom to leave the house. Whatever comes, many we will be wiser than just a year ago.

So tomorrow, I’ll wake up, return to the monte with my dog. I’ll exercise, make breakfast, work, read as much as possible, try to write to no one more frequently, and find others like me to connect with. And I’ll do it the next day. And the next. Maybe something can come out of it. Thanks for reading.