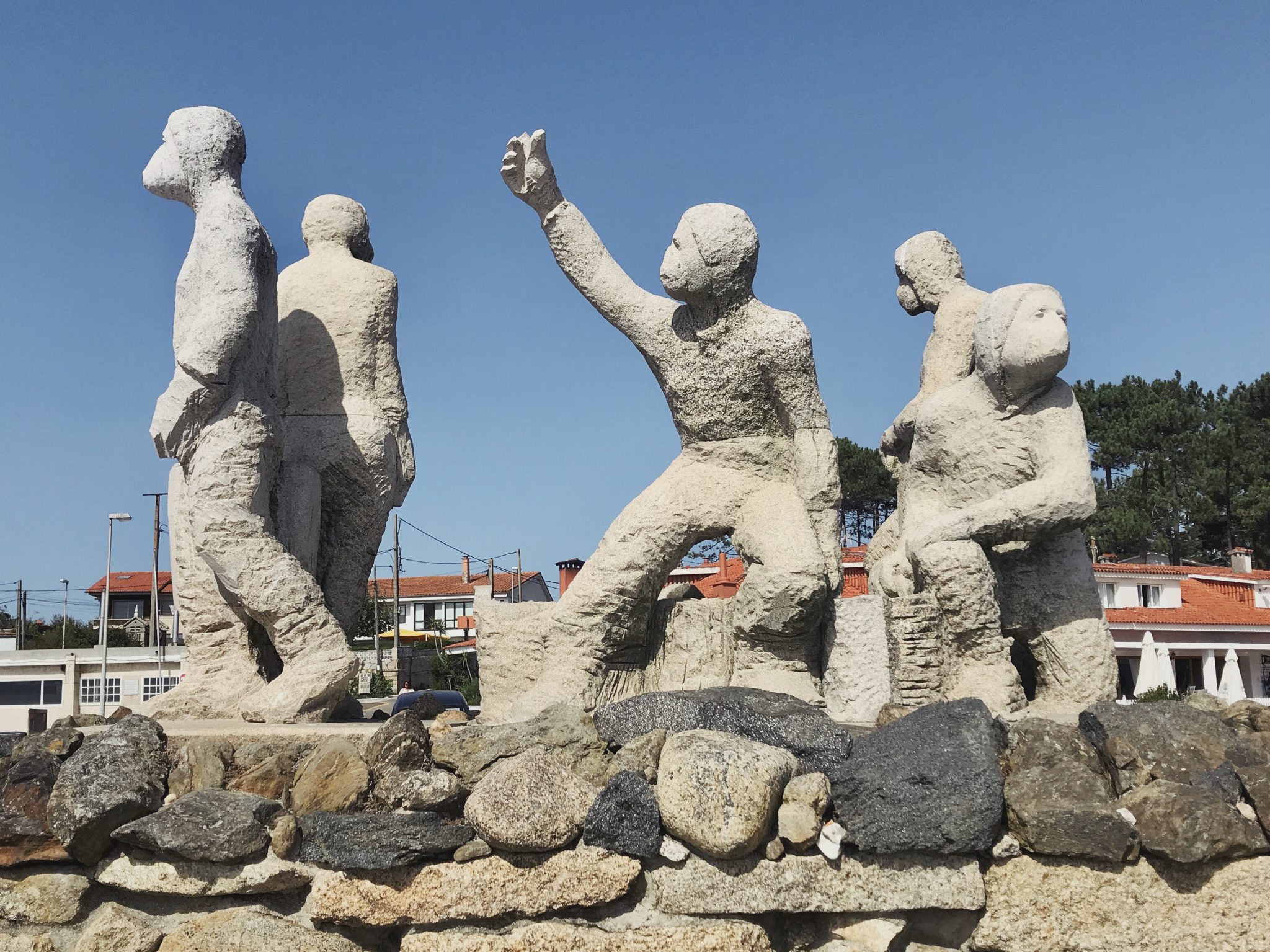 As we walked down down to the beach and chiringuito where a band was playing, I noticed a statue situated next to a small boardwalk near the water. Not wearing my glasses, I couldn’t make out any of the features of the figures. They looked too smooth, like the wind, rain, and surf had eroded them away. But as I came closer, I realized the figures were wearing jumpsuits and masks. Of course, the Prestige.

The Prestige oil spill in November 2002 was the worst ecological disaster in Spain and Portugal. I wasn’t aware of it at the time, probably because I was 16 and mostly thinking about video games and who’s on AOL. During a storm off the Costa da Morte, one of the Prestige’s tanks burst and started leaking oil. Fearful of environmental damage to their respective sovereign waters and fishing industry, France, Portugal, and Spain all denied the Prestige port of entry. A few days later, it eventually split in half and sank, purging a total of 17.8 million gallons of oil, more voluminous and more toxic than the Exxon Valdez incident.

The damage for spill was catastrophic for Galicia, with oil covering 1,300 kilometers of coastline. The Xunta suspended fishing for six months. Along with the company TRAGSA, thousands of everyday Galician volunteers donned white jumpsuits to clean up their beaches. Looking at photos of the cleanup is intense, as many wildlife suffered and died because of this single-hull tanker and our insatiable appetite for oil and globalized development. Not only was there environmental and economic damage, but human damage as well.

The damage could, however, run deeper than skin irritation and breathing difficulties. A study of clean-up workers from the 2002 Prestige oil tanker spill off the coasts of France and Spain found increased levels of DNA damage. The greatest damage, the researchers found, was found in workers who had not worn protective masks, though elevated levels of damage seemed to dissipate over time.

A year later, the cleanup operation was designated as a success. Galicia now has more Blue Flag beaches than before the spill. This statue is a tribute to those people.

Nunca Máis means never again. Never again should we, the people and the appointed vicegerents of planet Earth, allow business interests to pollute our waters, jeopardize our health and livelihoods, and run roughshod over the resplendent natural world. Meeting this statue and being reminded of the Prestige oil spill was a reminder of this. Patricia and I are currently watching Awake: A Dream from Standing Rock and I’m struck by the wanton carelessness and organized violence of DAPL security forces against peaceful people of prayer who want to protect the water for future generations.

We are guests on this planet. We must remember this everyday. To me, this means momentarily getting out of our bubbles, our social micro-dramas, and our digital lives, that prevent us from seeing the forest for the trees.